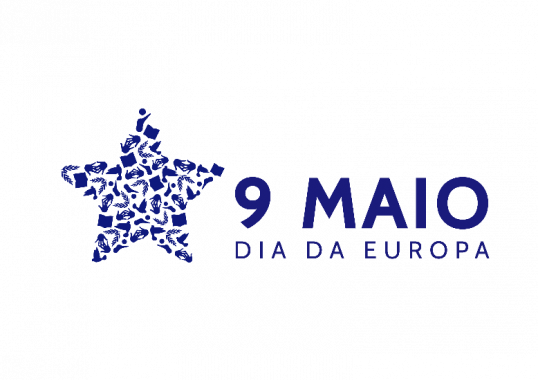 The visual identity of this Europe Day 2022 was developed by students of the degree in Design, discipline of the Graphic Design Laboratory, coordinated by professor Tiago Navarro Marques, from the School of Arts of the University of Évora, in response to a challenge from the Representation of the European Commission in Portugal. The selected proposal is formed by a star, symbol of the Union, composed of elements that represent essential principles: democracy, culture, sharing, freedom and peace.

On the 9th of May, at 15:00, the Protocol Session of the Day of Europe, in the Palace of D. Manuel, is opened by the anthems of Europe and Portugal interpreted by students of the Music Department of the School of Arts of the University of Évora and by the speeches by representatives of the European Commission, the Portuguese Government and the Évora City Council.
The Palace will host the Multilingual Traveling Exhibition «Alice in Wonderland», an initiative of the European Commission’s Directorate-General for Translation, which is brought to Évora by the Europe Direct Center Alentejo Central e Litoral, with 37 copies of Lewis Carroll’s work. translated into as many European languages (including the 24 official languages of the European Union). The guests will then be led to the Garden to the sound of Cante Alentejano. The protocol session is an event by invitation, open to the press with the need for accreditation until the 6th of May at cme.dc@cm-evora.pt.

In parallel, between 3:00 pm and 4:30 pm, the Public Garden will be animated by an exhibition of projects within the scope of the 35th anniversary of the Erasmus programme, organized by the National Agency Erasmus+ Education and Training, by a collaborative design panel promoted by teachers and students from the School of Arts of the University of Évora and the meeting of European Clubs of schools in the region organized by the three Europe Direct centers in Alentejo.

At 4:30 pm, Commissioner Elisa Ferreira kicks off the event open to the public in the same Public Garden of Évora and participates in a dialogue with students from different education and training entities, whose questions will lead the conversation.

This is followed by the announcement ceremony of the winners of the Fernando de Sousa Journalism Award, with the presence of members of the juries, authors of the pieces nominated as finalists and the respective directors of the media or coordinating professors.

The program ends with a cultural moment that includes a tribute to Ukraine, performances of different artistic expressions, including the participation of students from the Music and Performing Arts areas of the School of Arts of the University of Évora, and a DJ invited by the French Embassy, country that currently holds the Presidency of the Council of the European Union.